This is lovely route but don’t underestimate the difficulty of Col de la Ramaz.

Start off by riding via Les Gets to Taninges (see the start of the Joux Plane route on this website), taking the alternative route (turning right at Pont des Gets) if you prefer.

This time turn right on to the main road at Taninges signposted to Mieussy. Turn right at Mieussy at a roundabout (24km) with a signpost for the Col de la Ramaz to start the big climb. The ascent is beautiful, but long and increasingly tough.

The Col de la Ramaz is 14km and averages 7%, but it is tougher than it sounds. This is because of the length of it and the fact that the average gradient conceals some steep parts, notably in the tunnel part before you emerge into a verdant alpine bowl a few km short of the top. Crest the col at 39km and then descend through Praz de Lys and after descending five hairpins (R-L-R-L-R) turn left back uphill up via the col de l’Encrenaz.  This turn is a 180 degree turn shortly after the last right hand hairpin at around 46km.

This col is covered in another page on this website, but you are doing it in reverse, which is a lot easier because you are starting off higher up. It is well worth coming back via this col because it is so much quieter and more scenic than the main drag via Les Gets. Go up and over the col d ‘Encrenaz and down steeply through cote d’Abroz, turning right at the bottom when you reach Essert Romand at 59km, or left or you want a more meandering route back via La Touvière (taking a right onto the main road to Montriond/Morzine).

In essence, once you have got down to Essert Romand you are close to home and can take a variety of routes back to Aiglon Morzine for a well-earned beer. 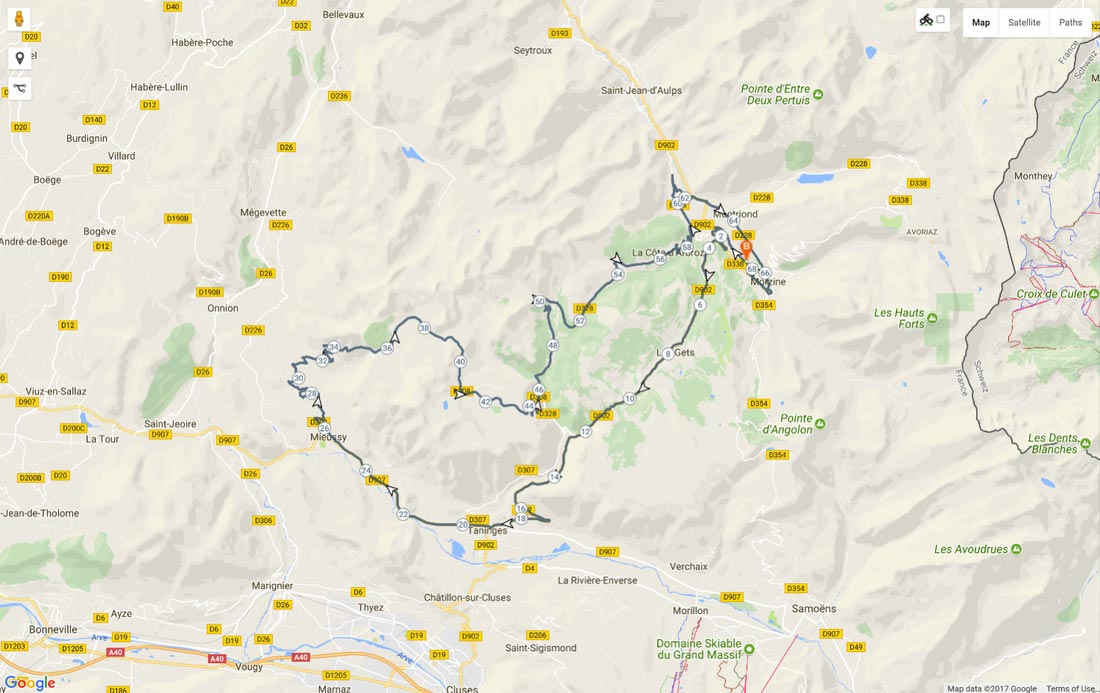