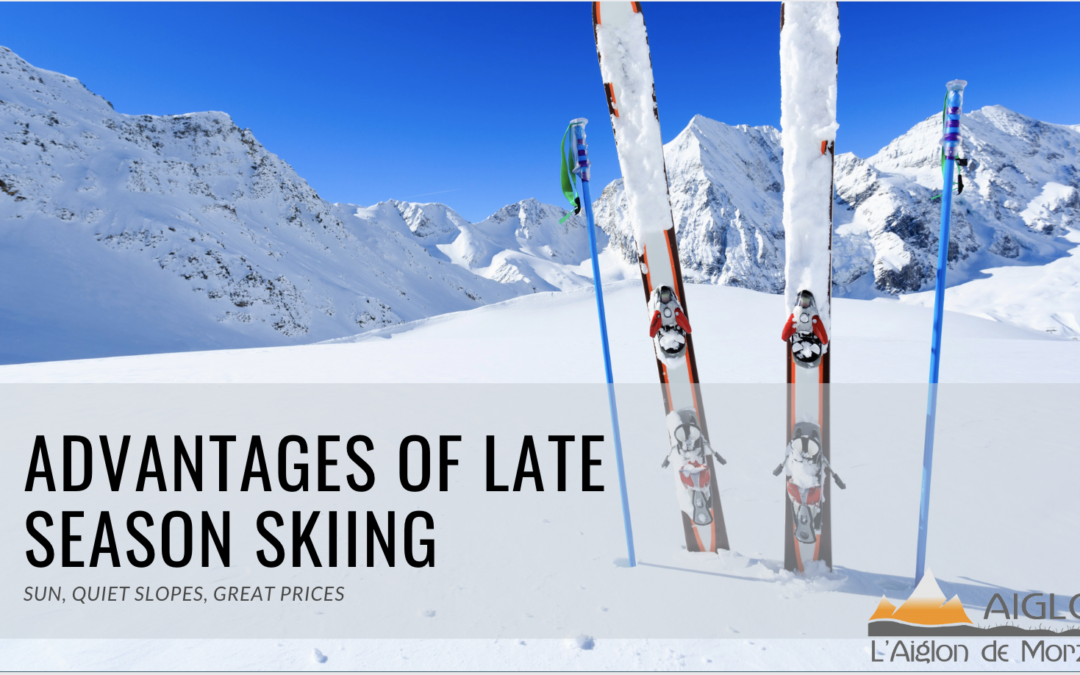 When people go to book a skiing holiday, the most obvious and popular time to book it for is in the prime of Winter- the months of December, January & February. We’d like to highlight some of the benefits of booking a skiing holiday at the very end of the ski season just as Spring begins, and why many people prefer the quieter months of March and April. Morzine has everything you could want and need for skiing in later months like April. We are a year-round holiday destination and a social hub with tons to do and explore, and skiing is available all the way up till the end of April.

So what are the top 5 advantages of Skiing in April?

The reason that skiing in Morzine is still available coming into Spring is due to its surrounding high altitude mountains. You can always find plenty of snow right at the top of and through to the end of the slopes on the mountains up and above Avoriaz – with altitudes going up to 3000 meters! You wouldn’t think it, but many resorts get their heaviest snowfalls at the beginning of spring, which means there’s tons of fresh powder in April. Just grab a lift, head for the summits and hit the slopes.

A huge advantage of late-season skiing is that the weather is much better and the days are longer, which allows for more time to be out skiing, and a better & brighter atmosphere. Morzine is well known for its wide-open valley with tons of sunshine –so not only can you ski amongst the sunny terrain, but if you want to explore the mountains in another way, why not take a day out and have a go at paragliding? Morzine is infamous for its paragliding facilities and there are a variety of excellent organizations offering them. While the ski season ends at the end of April, L’Aiglon de Morzine is open year round and there are tons of other summer activities to check out in Morzine, read about mountain biking, horse riding, hot air balloon flights and so much more on our website.

Since the peak skiing season is over, the price of flights and accommodation often take a cut. In the months of Spring you can enjoy a skiing holiday just as good (if not better since it’s not as busy) as in peak months, for a fraction of the usual price. This means more money can be spent on going out to nice restaurants and bars, treating yourself to some well-deserved food and drink after a hard day’s skiing. Check out our accommodation discounts, where specific end of season accommodation options have been reduced by up to €375.

No one particularly enjoys it when the slopes are packed with people and you’re trying to avoid bumping into each other, or when long queues for ski lifts waste valuable skiing time. Why not simply avoid the hustle and bustle of peak skiing periods and come out in spring when there are not as many fellow tourists. While skiing in April, there are fewer people on the slopes and you can enjoy having the mountains to yourself.

After a heavy season of skiing, there are always tons of end of season festivities and parties going on. Morzine is buzzing with local workers who have been flat out all winter, who just want to let loose and party! Check out the legendary Folie Douce after a day on the slopes and enjoy the music!

Make sure to check out our Morzine Accommodation options on aiglonmorzine.com before booking your late Season Skiing here.